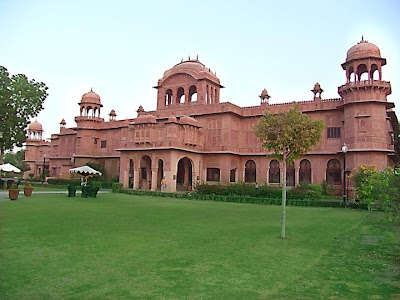 Bikaner is the region/district of the Rajasthan State, India. It is positioned at 330 kms distance in North West of the Jaipur, the capital of Rajasthan. Founder of Bikaner was Rao Bika (2nd son of King Rao Jodha), and the year was 1488. Rao Bika was trying to create own named state but was not able due to his father empire and expansion policy. However, later he got the chance to build own kingdom by creating the district Bikaner. The meaning of Bikaner is “city of Bika.” The fort of Rao Bika was constructed in 1478 and named as Junagarh Fort. Presently, Bikaner is fifth biggest metropolis of Rajasthan. The sweets and snack’s items of Bikaner are world-famous.
Attractive spots of this popular Indian tourist place are mentioned below: 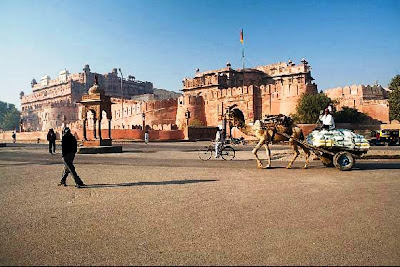 Lal Garh Palace: Royal families and rulers of Bikaner are still alive in astonishing red stonework and constructions available with remarkable patterns. The oriental structure and design with Islam, Rajput and European products in Indo-Seresanic style is unique thing for visitors in this palace. It was structured in supervision of Col. Swinton Jacob.

GGJM (Ganga Golden Jubilee Museum): timings for museum are between 10:30am to 4:30pm, and Friday is the holiday. Here tourist can enjoy archaeological things such as pre-Harappan, terra cotta, Gupta and Kushan’s family history, pottery, tiny paintings, armory and coins for diverse periods.

CRC (Camel Research Center): Enjoying the ship of desert is must be watching thing in Bikaner. The only camel breeding farm in Asia is present in Bikaner. CRC is established by camel Corp of the English army which is serving more than 250 camels at a time.

RSA (Rajasthan State Archives): center is open from 10:30am to 4:30pm, though Sunday is a holiday so a tourist can plan the trip accordingly. Researchers will get more interest in this place as there are crucial and vital collections of diverse administrative record such as Vakil Report, Persian Farmans and numerous records of the Princely cities of state Rajasthan.

Bhandasar Jain Shrine: the temple was constructed in 15th century having the Italian marble floor with English interior tiles and leaf paintings in gold color. This Jain holy shrine is famous for its beauty.

Havelis (Palaces): the countless palaces and small havelis of Bikaner where the dignified and the affluent accommodations. The havelis are attracting a tourist for their obscure craftsmanship on the walls. Some best havilies are Gogagate, Rangari Chowk, Daddhon Ka Chowk, Assanion Ka Chowk, Binnanion Ka Chowk Daga Chowk, Mohta Chowk, BK School and Jassuar Gate. 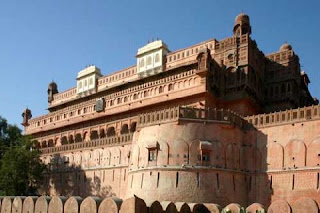 Annual Camel Festival: The camel fest celebrated in every January is special moment for a tourist. People are attaining Bikaner to take pleasure of such event. The Tourism Department, of Rajasthan is making administrative arrangements for the festival. Fest begins with the stylish Camel March.

Few gateways near Bikaner are available for visitors such as Gajner (only 34 kms away), Deshnoke (only 34 kms distant), Kolayat (only 50 kms away), Katariasar Village (only 45 kms away). The village life of India can easily be seen at these points, though the religious feelings of people living in villages are very strong. Shoot of wildlife in Bikaner is possible at these centers are Bikaner as well.

By Train: railway station of Bikaner is properly linked to the big cities such as Howrah, Delhi, Jaipur, Jodhpur, Kalka and Bhatinda.